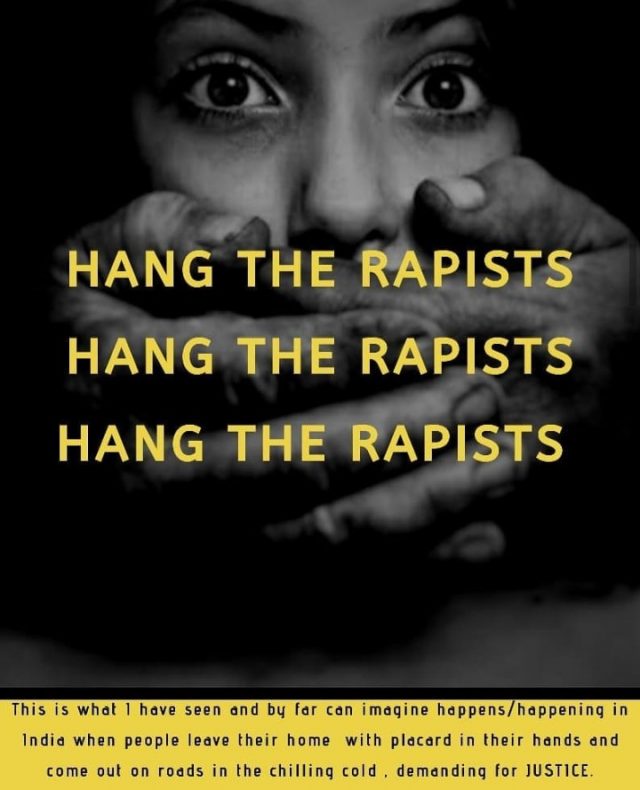 This is what I have seen and by far can imagine happens/happening in India when people leave their home with a placard in their hands and come out on roads in the chilling cold, demanding for JUSTICE.

And this is what our courts do. Not complaining, accusing. Just letting you guys know this is what happens in a courtroom.
Dates after dates – dates after dates. Continues till 7 years (In Nirbhaya’s case)
Well, who knew the word JUSTICE comes with a lot of waits and struggle even when it’s not our fault. At least for not being a girl, woman, lady, daughter.
How effective is India’s justice system towards the rape?
According to NCRB
2017- 90 rapes a day (approx)

March 2018 – 1,66,882 (approx) cases of Rape. Conviction rates remain low across the country due to the pendency of cases and delay in investigation and prosecution.
In a 2019 survey of police personnel across India, the Center for the Study of Developing Societies (CSDS) show that around 20% of all police believe that gender-based violence complaints are false and motivated. No wonder why women trust police less than men.
Survey :
JUSTICE SYSTEM LETS WOMEN DOWN.

Justice system?
• The Police.
• The Media.
• The Judiciary.

All you need to know about SMP Realty