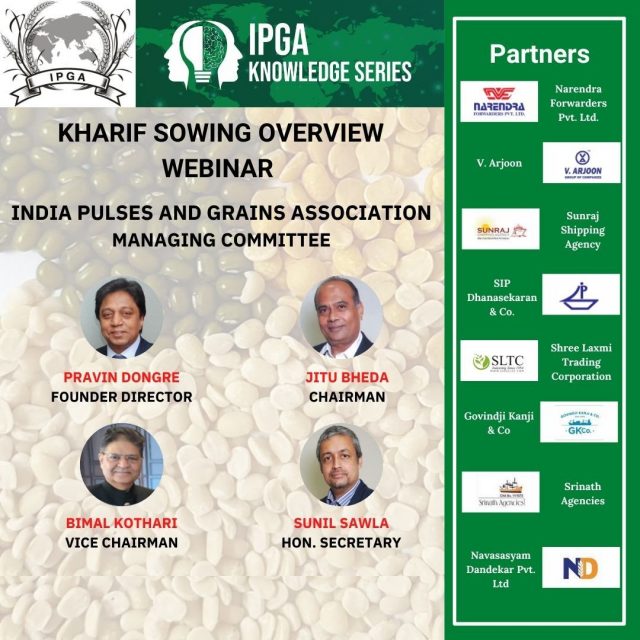 India Pulses and Grains Association (IPGA), the nodal body for India’s pulses trade and industry, recently hosted a webinar on Kharif Sowing Overview under the aegis of the ‘IPGA Knowledge Series’ with the aim of getting an in-depth insight into this year’s sowing pattern and future outlook for pulse crops of Kharif season, its yield, impact on prices and import-dependence. The webinar that was attended by over 700 trade stakeholders from over 20 countries.

While the Kharif season began on a good note with timely monsoon and good sowing of pulse crops, the erratic monsoon pattern from mid-June to mid-July caused a rainfall deficit in many parts of the country, posing a threat to the crop yield. During the webinar, panellists covered key aspects such as impact of change in India’s import policy, consumption patterns, the hindrances to export of pulses given the container shortage and surge in freight charges, among others.

Mr Bimal Kothari, Vice Chairman, IPGA setting the tone of the webinar in his opening remarks, said, “Even as monsoons kicked off at a good pace, its progress halted across central India around the third week of June, causing a three-week delay in rainfall during the crucial Kharif sowing season. IPGA’s webinar saw a host of industry experts who helped understand the Kharif sowing pattern, and the impact of monsoon on recovery.”

Dr. D S Pai, Head – Climate Research and Services, India Meteorological Department speaking about the performance of monsoon this year, said, “Rainfall was relatively good in June – remaining above normal around 10% across most parts of the country. In July, the north-eastern part of the country saw a major deficiency – 7% below normal. However, the situation began worsening in August due to which eastern part of central India as well as parts of Western India had a severe rainfall deficiency

Mr Nirav Desai, Managing Partner, GGN Research, speaking about the sowing of Kharif Pulses, explained how the sowing was robust in June, backed by timely rainfall, which led to a timely sowing in most parts of the country. He said, “Even though monsoon started early, the abrupt gap between June 15 and July 15 curtailed expansion of the crop area, with an overall rainfall deficit of 27.2%. As Rajasthan and Gujarat witnessed a dry spell, it may cause an overall crop deficit of upto 25% in Rajasthan.”

Mr. B Krishna Murthy, Managing Director, Four P International, detailing the scenario of Urad said, “India has been steadily improving its crop size of growth over the last few years to meet domestic requirements. For example, India produced 1.7 million tonnes in 2010 year, which went up to nearly 3 million tonnes in 2018-19 and the crop shortfalls are met by imports from Myanmar.”

Mr. Krishna Murthy further said, “At the beginning of Kharif season 2020, India had a carry-on stock of an estimated 4 lakh tonnes, which was being held by the government and procurement agencies as well as the private traders. Our sowing was good at 37 lakh hectares and the monsoon has neither been abnormally low, nor abnormally high. However, the situation depends on how the balance 33 days of monsoon season fare. The biggest threat to the crop will be the abnormal rainfall which may pose a threat to standing crops.”

Mr Nitin Kalantri, Chief Executive Officer, Kalantry Food Products, in his presentation on Tur said, “Failure of the crop or less sowing and consequent production deficit due to an erratic rainfall pattern will cause a surge in import of the Kharif crops in days to come. This will in turn cause an inflation in the price of pulses. In its 4th advanced Estimate, the Government has projected a production of 42.8 lakh tonne. However, the production would not be more than 37 lakh tonne, which will also drive a surge in prices. An estimated 2 lakh tonne of crop will be imported from Myanmar and Africa, which may add to the costs of the crop because of high freight costs. India therefore needs to be more dependent on Indian farmers, we have to be Atmanirbhar so that we don’t import too many quantities and going forward, the prices would not rise,” Mr Kalantry explained.

Mr Punit Bachhawat, Managing Director, Prakash Agro Mills in his presentation on Moong said, “Even though the per capita consumption of Moong declined due to the lockdown and pandemic situation, it is expected that the same will increase in days to come. Trade projections suggest there will almost be a 25% surge in demand from present level in coming years and this gap is likely to be filled by more production and through imports. In India, pulses crop is mainly dependent on monsoon and only 30% crop is sown in irrigated lands. With a deficit rainfall despite an early start, the maximum support price (MSP) for Moong has been increased in India giving the much-needed relief to farmers in Maharashtra and Karnataka. While a timely monsoon did give hopes of a bumper crop, a major interval in rains and erratic patterns spoiled hopes for a good crop of moong.”

According to Mr Bachhawat, deficiency in rainfall is expected to hurt prices further. Explaining this, he said, “With a decline in crop production in Rajasthan, prices will start moving up despite expectations of bumper crop from MP and fresh arrival from Karnataka and Maharashtra. Imports from Tanzania and other parts of Africa will surge. On the other hand, with an increase in minimum support price (MSP), farmers will be interested in selling their goods to profit-making agencies and government bodies leaving little stock for the market and in turn pushing the prices up.”

Ms. Manisha Gupta, Editor – Commodities and Currencies, CNBC TV18 who moderated the entire webinar then led the Q & A Session which led to further detailed discussions on different aspects of pulse production during the Kharif season, the rainfall pattern and forecast and the impact on prices due to factors like surge in MSP and even import-dependence.

All you need to know about Mahabaleshwar Temple

All about the CAB service: Pune to Shirdi