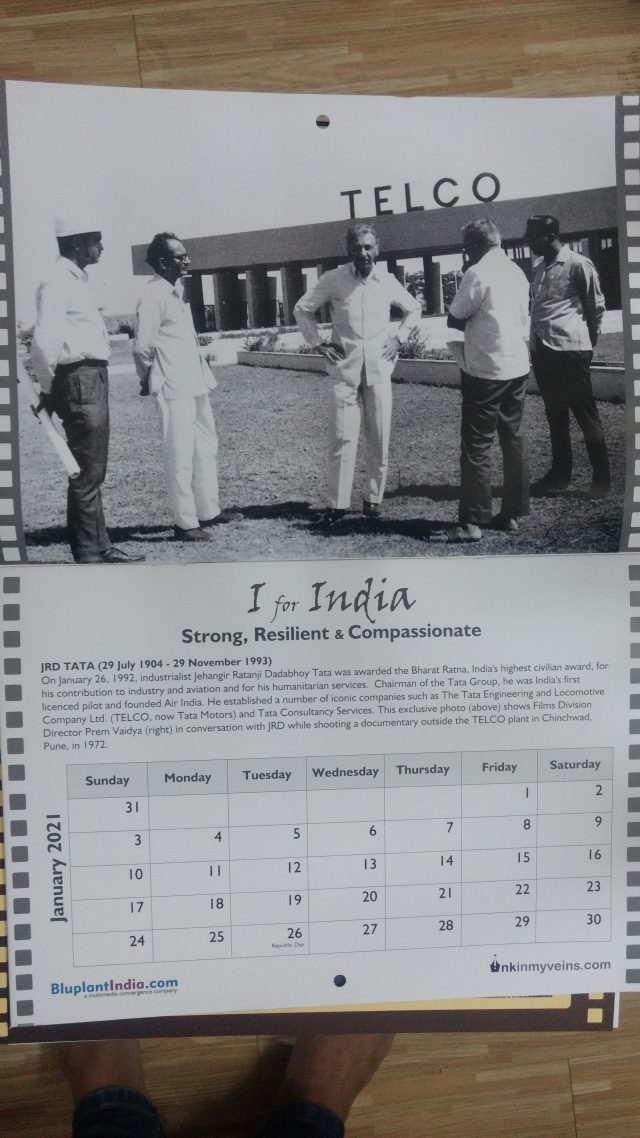 Pune: Watching the historic moments of our country on television is not a new thing but getting access to rare, historic pictures does not happen every day.

After all, going through the national archives or locating pictures in the personal collections of people who have witnessed history takes your time right? How often do you get to see rare photographs, with details, from the 1965 and 1971 wars against Pakistan; the last living photograph of our former prime minister Lal Bahadhur Shastri, when he was taking after dinner walk in his guesthouse in Tashkent or that of the great industrialist JRD Tata in an informal pose outside the TELCO (now Tata Motors) plant in Chichwad?

Such a rare set of pictures have been brought together in a limited edition ‘Commemorative calendar 2021’ from the collection of the Pramila and Prem Vaidya Archive, Pune.

The calendar has been titled ‘a filmmaker’s odyssey’ and gives a glimpse into the work of documentary filmmaker Prem Vaidya (February 26, 1927 – July 10, 2014), a man who was deeply patriotic and passionate about photography and film making. He had worked as a documentary filmmaker for the films division (Government of India) for 31 years. Vaidya was the recipient of numerous awards, including the national award and the Filmfare award for outstanding documentaries.

The commemorative calendar titled ‘I for India: Strong, Resilient and Compassionate’ opens up with a picture of the illustrious industrialist Jehangir Ratanji Dadabhoy (JRD) Tata, Bharat Ratna, standing in an informal post in the TELCO (now  TATA motors) plant at Chinchwad. The picture was taken when JRD Tata was interacting with Vaidya and some other crew during the documentary shoot.

Other rare pictures in the calendar depict victorious Indian soldiers from the epic tank battle at Phillora (Pakistan) in the 1965 India-Pakistan war. The beaming soldiers waving out to the camera are standing atop a Pakistani tank being towed away.

The calendar also has a close-up of Sir M Vishveshwaraya, civil engineer and Bharat Ratna,  whose birth anniversary ( Septermber 15, 1860)  is celebrated as engineer’s day in three countries- India, Sri Lanka and Tanzania. Incidentally, he is an alumnus of the prestigious College Of Engineering, Pune (COEP).

The calendar will take you on a journey of the events which carry high significance in the history of our country. The manner in which Vaidya has captured the pictures tells you about his love and dedication for filmmaking and photography.

The calendar is available for sale at  Venus Traders, Fergusson College road and Express Book Service, East Street, Camp. For home delivery one can call 9130002390.

Vaidya was a recipient of the National Award for Best Documentary FOR his film ‘Man in Search of Man’ (1974) on the aborigines of Andaman and Nicobar Islands; Filmfare Best Documentary of the year award for ‘Veer Savarkar’ (1984) and Ezra Mir Award for LifeTIME Achievement instituted by the Indian Documentary Producers and Association (DPA).

Looking for COVID-19 vaccine update? Use this government portal

All you need to know about Kirloskar Brothers